Santa Claus will soon be coming to town, bringing gifts to children.

Santa has several aliases, depending on the part of the world you live in. The English call him Father Christmas, the French know him as Père Noël, and Kris Kringle seems be a version of the Christkind, or Christ Child, who leaves treats for good German Lutherans.

In the Netherlands, he arrives in town on a steamboat or horse from Spain. On the night of Dec. 5, Dutch children put their shoes on the hearth – these days near the central heating duct – hoping that he will fill them with sweet rewards rather than a reprimand for poor behavior. The Dutch call him Sinterklaas – which has come into American English as ‘Santa Claus’ – short for Sint Nicolaas or St. Nicholas.

St. Nicholas and Santa Claus are historically the same man. But unlike the jolly figure who purportedly flies on a sleigh from the North Pole, the saint came originally from the balmy Mediterranean coast.

Who was St. Nicholas really?

As a historian of religions who has written books about ancient saints, I caution against reading accounts of saints’ lives as factual history. However, the earliest stories of St. Nicholas seem to correlate with histories and church documents of the period.

According to these early medieval texts, Nicholas was born around 260 A.D. into a Christian family. His birthplace was near the town of Myra, now called Demre, on the southwest coast of modern Turkey. At the time, Christianity was illegal under the Roman empire. 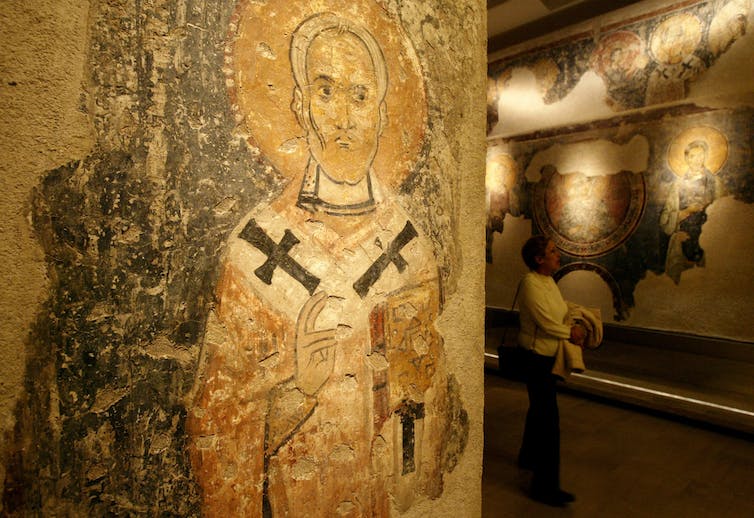 He studied to be a priest and spent time in prison for his beliefs. However, after Emperor Constantine legalized Christianity, Nicholas was elected Bishop of Myra.

During his lifetime, he became famous for defending his people against imperial taxes and other forms of oppression. According to the earliest document about Nicholas, from the fifth century, he prevented three loyal generals from unjust execution for treason.

A ninth-century Greek legend claims he revived three scholars who had been murdered and stashed in a pickling tub. He also saved three girls whose poverty-stricken father wanted to sell them into prostitution.

After his death, people believed that Nicholas continued to work miracles. His burial place, below the floor of his church, became a popular destination for pilgrims who begged Nicholas to relay their petitions to God.

Proof that Nicholas was listening, they believed, was in the “manna” – holy oil or water – that dripped from the tomb. Pilgrims took this manna home in little bottles or used rags to sop up the moisture that dripped from the saint’s tomb in its subterranean crypt. This was a common pilgrimage practice at Christian shrines.

Visitors to the coastal town of Myra spread Nicholas’ fame along sea routes across the Mediterranean. From there, word passed to the Latin West, and upriver to Russia. Soon, pilgrims from all over Christendom were journeying to Myra to seek the gifts of protection and healing from the saint, who was said to be especially attentive to children.

This pilgrimage was disrupted in the 11th century when Seljuk Turks invaded Anatolia. Christians feared that the Muslims who now governed Demre would disregard the saint’s tomb. So, one crew of pious Italian Christians decided to take action.

In 1087, three ships laden with grain set out from Bari, on Italy’s southeast coast, bound for Antioch. However, according to a monk named Nicephorus who wrote immediately after the event, their real mission was to steal St. Nicholas’ body.

In Antioch they heard a rumor that the Venetians too were planning a similar heist. The Barian sailors hastily sold off their grain and headed for Myra in search of St. Nicholas’ church. Priestly custodians there became suspicious when the sailors asked to see the saint’s body.

The Barians claimed that the pope had a vision directing him to fetch Nicholas to Italy. When the priests refused, they offered gold for the relics, but the offer “was tossed aside like dung.” Done with arguing, the Barians caught and bound the priests. Suddenly, a phial of manna fell to the pavement and broke. It seemed that St. Nicholas spoke to them: “It is my will that I leave here with you.”

So, the Barians broke through marble floor with picks and hammers. A delicious aroma filled the church as they opened the tomb. They found the bones swimming in a small sea of manna. They carefully wrapped the relics in a silk case brought for the purpose.

Nicephorus describes how they fled to their ship, pursued by outraged priests and a howling crowd of citizens demanding that they “give back the father who has by his protection kept us safe from visible foes.”

Yet the crew made it back to the harbor at Bari, where the townsfolk and clergy processed, singing joyous hymns, to greet the saint.

St. Nicholas gets a reputation

A new church was built for Nicholas in the court of the governor of Bari. A few years later, Pope Urban II — the one who would preach the First Crusade – formally enshrined the relics of the saint. 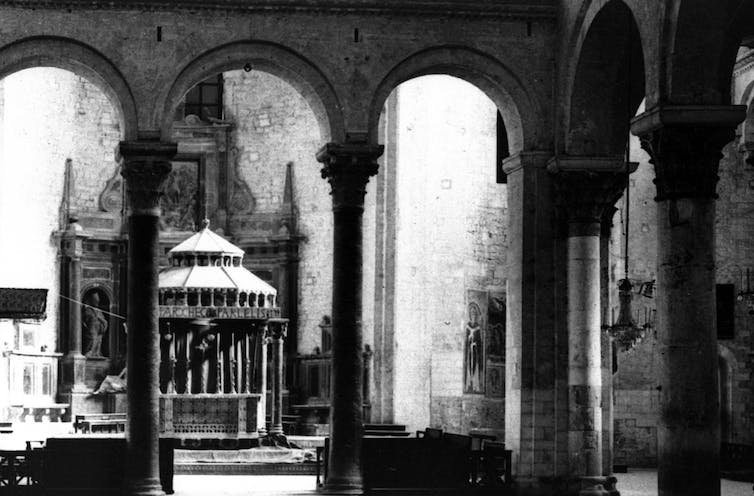 A view of the interior of the church of St. Nicholas, built in the 11th century, at Bari. AP Photo

The Barians believed that manna continued to ooze from Nicholas’ coffin. And going by the claim on the basilica’s website, the belief persists to this day.

Within a decade of the saint’s arrival in 1087, the Basilica di San Nicola was one of Europe’s most popular pilgrimage destinations. May 9 is still celebrated as the day that Nicholas moved shrines or was “translated.”

For at least five centuries, the region, which includes Bari and its saint, was caught in constant wars for possession of southern Italy. In 1500, Bari fell into the hands of King Ferdinand of Aragon, whose marriage to Queen Isabella of Spain created a global naval power.

Because Nicholas was a patron saint of sailors, Spanish sailors and explorers carried stories of the saint wherever they went: Mexico, the Caribbean, Florida and other ports around the world. 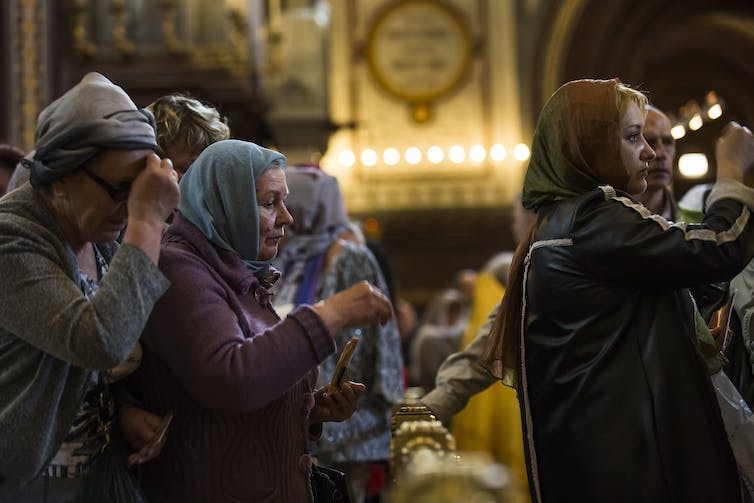 St. Nicholas around the world: Russian Orthodox believers line up to kiss the relics of St. Nicholas that were brought from an Italian church where they have lain for 930 years. AP Photo/Alexander Zemlianichenko

Even the Dutch, who rebelled against Catholic Spain and formed a Calvinist republic in 1581, somehow maintained their devotion to Sinterklass. In other parts of Europe, St. Nicholas lost his feast day but his concern for children helped link him to the gift-giving tradition of another December feast day: Christmas.

How true is this story?

In the 1950s, Italian scientists examined the bones enshrined in the Basilica di San Nicola, seeking evidence of authenticity.

They found the skull and incomplete skeleton of a man, dating to around the fourth century. More recent technology has allowed experts to use the bones to reconstruct Nicholas’ face – he looks like an old Greek man with a broad, worn face. He lacks the rosy cheeks and Anglo-Germanic features of modern Christmas decorations, but like the Santa Claus of greeting cards, he was probably bald.

Turkish archaeologists now claim that the Italians stole the wrong body and that Nicholas’ remains never left Demre. They have discovered another sarcophagus dating to the fourth century in the same church, which they claim contains the saint.

Meanwhile, historians have suggested that the story of Nicholas’ translation is a fiction purposely created to advertise a new pilgrimage center in the 11th century. Although relic theft was common in the Middle Ages, grave-robbers often made mistakes or lied about the authenticity and source of their bones. Nothing in the shrine at Bari proves that the bones inside belong to the fourth-century Bishop Nicholas. 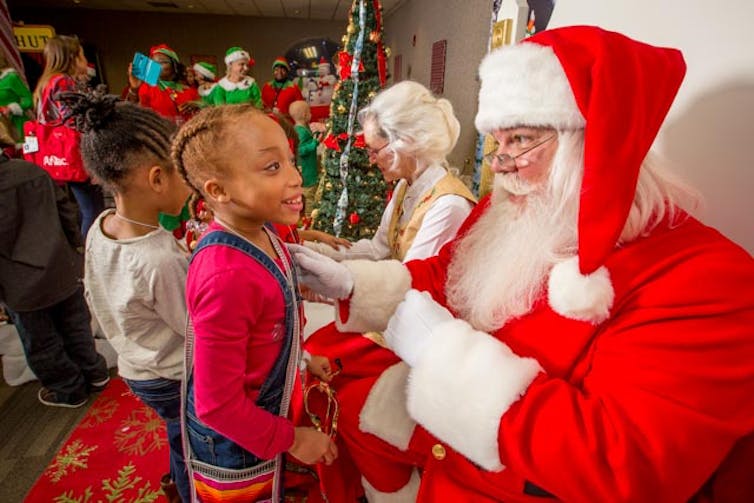 Which Santa story will you tell this holiday season? Delta News Hub/Flickr.com, CC BY

Still, this holiday season, when you tell your children about Santa Claus, why not include the tale of Santa’s well-traveled bones? And don’t forget the manna, which is believed to still flow in Bari.